Liberty Hall, built for Senator John Brown in Frankfort between 1796-1803, is one of the finest example of early federal-era architecture in Kentucky. Other early Kentucky buildings display elements of the style but the refinement and sophistication of Liberty Hall is unparalleled.

It features a pedimented three-bayed central pavilion, whose focus is a beautiful colonnetted doorway with a fine Palladian window superimposed, and having a lunette set in the tympanum of the pediment on axis. The exquisite cornice carries left to right across the entire façade. Above the gabled roof rise a pair of equally balanced and substantial chimneys, capped in the mid-eighteenth century Virginia tradition, and which are unique in Kentucky. The excellent proportions of this façade indicate that the house must have been designed first on paper as an elevation drawing, and was probably the earliest in the commonwealth, at least in the domestic field.

It is most fortunate that Liberty Hall has not been spoiled by a changed environment. The retention of sympathetic surroundings in the city today is a phenomenon. This condition was not achieved at LHHS without considerable effort and expense, as in the purchase and removal of the later house interlaying it and the Orlando Brown house. Thus the visitor enters Liberty Hall receptive of its charms and is agreeably fulfilled. The gardens behind it tie in with the propriety of the setting.

An excerpt from A Critique on Liberty Hall by Clay Lancaster, 1980. 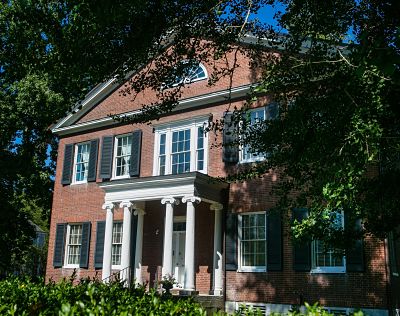 A Greek Revival-style building, the Orlando Brown House was built in 1835. The architect was Gideon Shryock, a Lexington, Kentucky native, who was the first professional architect in Kentucky. He was a pupil of William Strickland, who was one of the first architects to introduce Greek Revival architecture to the United States. Strickland was a student of Benjamin Latrobe, one of the first professional architects in America. Shryock's first major work was the Old State Capitol in Frankfort. He was 25 years old when he won a design competition in 1827 and superintended its construction until its completion in the fall of 1830. Senator Brown was one of the commissioners for this building and must have been mightily impressed for he persuaded Shryock to design his son Orlando’s home.

The Greek Revival-style flourished from 1825 to 1860, but few Kentucky residences predate 1840. The Orlando Brown House and an exact contemporary, The George Keats House in Louisville, were among the first of the style in Kentucky. The Orlando Brown House is the only known residence designed by Shryock. His public buildings include: the Jefferson County Court House (1835), Louisville; Old State Capitol (1825), Frankfort; Old Morrison, Transylvania University (1830), Lexington; the Franklin County Court House (1832), Frankfort; Louisville Medical Institute (1838), and the Old State House (1833), Little Rock, Arkansas.