The event features bourbon tastings, music, silent and live auctions, and food that includes a version of a "hot brown." Over the last seven years, Bourbon & Browns has grown--the first B&B held in 2013 attracted 60 guests, in 2019 there were 350 attendees.

The fundraiser has grossed over a quarter of a million dollars to support ongoing education and preservation at Liberty Hall, a National Historic Landmark. Bourbon and Browns has become a premier springtime event in downtown Frankfort and the anchor of the Kentucky Distilled Weekend. 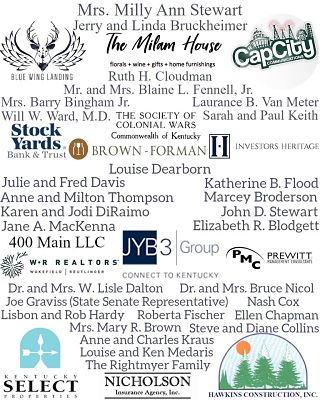 the Smithsonian Program at George Washington University and Bedford College, London. For the past thirty years, he has been actively involved in the study of painting in the South. He has served in curatorial capacities for the Archives of American Art, the National Portrait Gallery, the Lauren Rogers Museum of Art, the New Orleans Museum of Art and as founding curator of the Morris Museum of Art’s Southern Collection. His publications have won several awards including from the Kentucky Historical Society. He has been recognized by the Museum of Early Southern Decorative Arts with the Barbara Carson Distinguished Scholar Award.

Online auction from April 18-25. To bid on items: click here.

Auction Item: One-week stay at Les Bourdeillettes, a charming farmhouse on 75 acres in the French countryside of Dordogne. Sleeps 10, available any week in 2021 or 2022. $3,000 minimum bid.